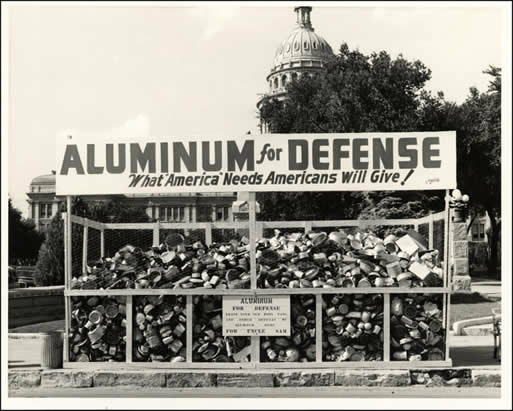 Second World War was a tough time for everyone because it was a war that involved more than 30 different countries among whom where heavyweights like U.S., England, China, Japan, Germany, Italy and the Soviet Union, and around 73 million people lost their lives during this war. And to be able to fight this war many countries had to go to extreme measures to be able to provide their soldiers with the necessary equipment, and one of them was metal and especially aluminum recycling.

In the early 1940s after the attack on Pearl Harbor there were drives organized in the U.S. where people were encouraged to collect all materials that could possibly be used for war efforts 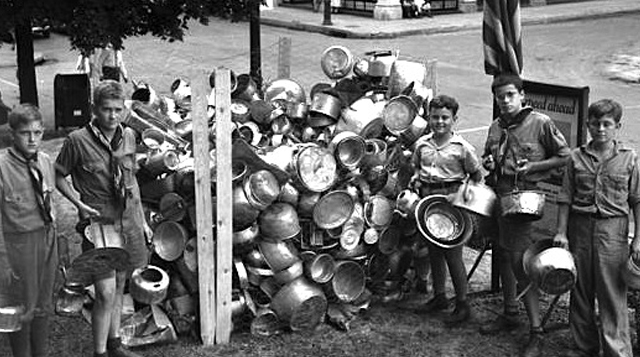 and bring them to their designated drives. Things like rubber, silk, steel and aluminum was all collected. These drives were mostly organized to make sure that the U.S. wouldn’t run out of materials like rubber and silk because the supply of both of these materials was cut off by Japanese conquests in Asia. But aluminum, too, was collected in great amounts, later even with the help of things like celebrity and model advertising campaigns.

The Department of National War Serveces in Canada launched a salvage program in 1941, where the citizens were asked to donate paper that was later recycled into newspapers, rags that ware made into bandages and blankets, fat to make dynamite and of course metal to create airplanes, jeeps and even tanks. Unfortunately the recycling drives for aluminum in Canada received quite poor response, however aluminum still was one of the main resources that was collected, to enrich Canadas reserves of these materials and be able to provide their troops with the right equipment for this war.

And in Britain, too, the government organized aluminum-scrap drives, where people brought all of their spare aluminum to them, starting from pots and pans and ending with the bumpers of their cars and other less crucial aluminum car parts. This resulted in Britain pulling in around 70,000 tons of aluminum, and only after this great aluminum collection articles started to surface that this aluminum couldn’t even be used to make aircrafts for the military. 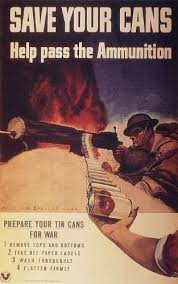 So why exactly these aluminum recycling campaigns were launched then? Many say that they were more a propaganda move from the governments of the countries where these recycling drives were held to keep the public rooting for the war and their troops and to feel like civilians, too, have some impact on the well-being of their country during the war. For example Americans were very reluctant to support not to mention to participate in the war at first, but of course after Pearl Harbor a kind of consensus was created in the minds of all Americans and they all wanted to do something to help their soldiers and to avenge those who died in the Pearl Harbor attack. So these drives were the perfect way for them to feel involved.

The statement of the drives being propaganda is partly true because there was a lot of speculation about how useful the collected materials actually were. The truth is that these aluminum recycling drives most likely were more a way for the countries to keep the patriotism and morale among their citizens high, and less as an actual contribution to the economy of these countries, their war efforts or material supply. However, because in tense situations like war sometimes morale and patriotism can go a long way, the recycling of aluminum wasn’t for nothing, and maybe it was one of the many reasons why Allies were able to beat the Axis and win the Second World War.