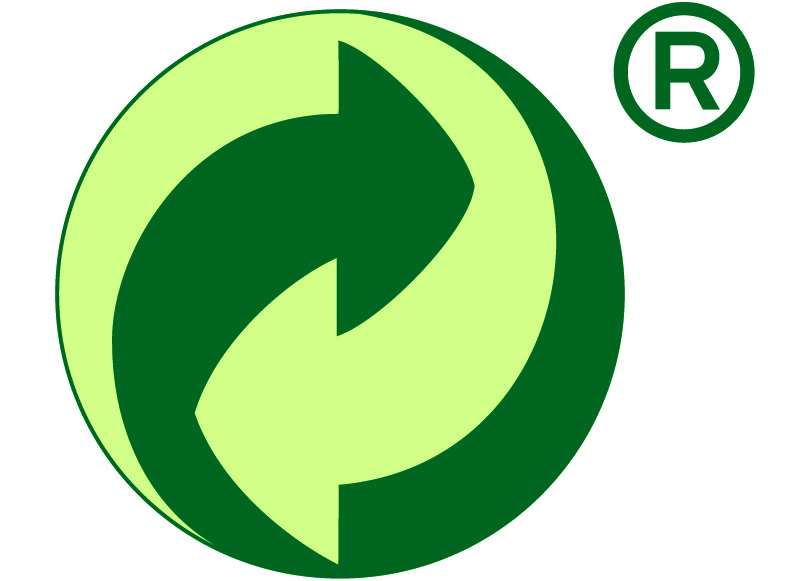 Many associate recycling or green living for that matter with the symbol of white and green arrows swirling together. That symbol is called the Green Dot symbol. It often is called the “the recycling symbol” and it actually is quite accurate description of the symbol only in a bit different way than people usually think so let me tell you about that little symbol.

In reality this swirling symbol actually is a European trademark owned by a German company called Duales System Deutschland GmbH (DSD). It is their trademark but it used and protected as such trademark in the whole world making it one of the most used trademarks in the world. It mainly symbolizes European network of systems aka waste management companies for recycling packaging materials for different products called the Packaging Recovery Organization Europe or PRO-Europe for short, therefore it also symbolizes the effort of European manufacturers to provide that the packaging of their products and goods will be recycled in hopes to help make a greener and more sustainable world and limit the amount of landfill space each country needs to use to store their waste.

This symbol was created in 90s by a man named Lars Oehlschlaeger who worked for a German advertising agency. In 1991 a German non-profit organization called Duales System Deutschland GmbH (DSD) introduced a system called Green Dot as a way to help with the amount of waste packaging of different products made, because the space in German landfills was getting tight and Germany needed a solution for this problem. This Green Dot scheme worked so that any product that had the green dot symbol on them was collected by DSD and brought to recycling, because companies paid for these services by buying the Green Dot license. Seeing the success of this scheme European Union, too, decided to adopt a similar system. At first it was called the “Packaging and Packaging Waste Directive” that dictated that all EU manufacturers needed to recover their packaging by either taking part in a Green Dot curated waste recycling system or a national one. And then a bit later the “Packaging Recovery Organization Europe” directive or PRO Europe directive was set up that helps national waste recovery programs to that they could be as efficient as possible as well as to help with the licensing of the Green Dot symbol so that it would be done more rightfully. And because PRO Europe got the basis of this system from the German Green Dot system is was decided that the PRO Europe directive, too, will use the same symbol that was used in Germany.

Right now this symbol is used by more than 17 thousand manufacturers of 28 European countries to symbolize that they finance not only recycling of the packaging of their and other producer products but also the collection and sorting of the used packaging so that it can be recycled. Although the usage of this symbol isn’t mandatory in any way, for a manufacturer to be able to print this Green Dot symbol on their products they do need to acquire licensing that ensure that they actually fallow the Green Dot scheme.

And countries outside the so called “Green Dot” country circle, too, can sign the world-wide license for using the Green Dot symbol that enables them to use the symbol to show that they are paying for the recovery and recycling of their packaging as well as profit from participating in the Green Dot scheme.